When The Light Came On: Lunch & Learn

My heart became burdened about modern-day slavery at the Passion Conference of 2013. We heard a talk from Gary Haugen (the president of International Justice Mission), testimonies of trafficked victims, and a panel conversation about how to integrate fighting slavery into daily life. For the first time, I really became troubled by human trafficking, and compelled to take action against it.

It’s to the Passion Conference that my mind returns now, because it’s where the light came on for me. Recently, I watched the light come on for several other people.

Nomi Network hosted a “Lunch & Learn” two Thursdays ago that I was privileged to attend. A “Lunch & Learn,” in essence, is an event Nomi Network hosts where representatives from Nomi speak about the problem of human trafficking, how Nomi sustainably fights trafficking, and the history and uniqueness of our organization. Attendees listen for half an hour or so as our representatives share, and then they have the opportunity to ask any questions they have.

Maria, our Operations & Special Projects Manager, led us in discussing statistics about trafficking, covering definitions of what trafficking is, and revealing the pervasiveness of the problem, even in the US. The attendees were attentive and curious, and asked a lot of questions even at the beginning. Next (as we enjoyed pizza), we heard Jessica Hirsch, our Sales & PR representative, describe the ins and outs of Nomi Network, including its mission, its history, and the success Nomi has had in both India and Cambodia. I myself learned new information from listening to Jessica, and was reminded afresh of the powerful ways that Nomi is shifting the attitudes towards trafficking on a cultural level in India and Cambodia. We ended with a time for questions, and finally wrapped up the official discussion as people mingled, bought products, asked final questions, and went back to their work days. 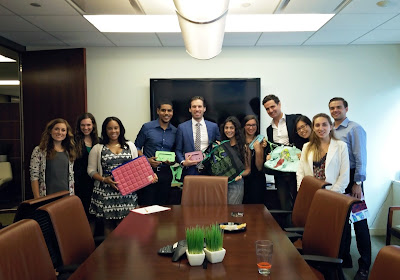 Watching people come to a fuller understanding of the pervasiveness of human trafficking, and then respond accordingly, reminded me of a few things:

1. Many people may not be aware of the devastating realities of human trafficking and modern-day slavery in general.

It’s easy for me to forget about the days before human trafficking truly became an issue to me; right now, I’m steeped in learning about it as an intern for Nomi. I learn more every day, and I’ve got a lot of learning yet to do! Wherever you are on the scale of awareness, I think we can always learn more, and I invite you to do a little research (End It and Polaris are a couple great sources). Pick three friends and share what you learned with them!

2. Many people have an innate impulse to stand up against injustice, but may not know how.

I gave money and participated in Passion’s “End It” movement, but didn’t know what to do next. If you identify with this, start off small! Pick and stick with an organization (I’m a little biased, but Nomi’s a great one!), and get involved. Could you donate money? Raise awareness by promoting them through your social media networks? I think the best way to fight injustice is to get behind organizations with the vision that you really identify with.

3. Many people have connections and outlets they could leverage to help fight injustice.

I’m definitely still working on this one. Think of people and organizations in your life that you could get involved in the fight against injustice. Could you create a campaign to raise money through your club or your church? Do you have favorite stores that might be willing to sell products made by survivors of human trafficking? Use your creativity!

I was reminded of these things, and felt a new appreciation for Nomi Network as an organization that meets people at all stages of awareness and involvement, communicating a call to action and providing a corresponding outlet for action. Jessica dubbed the attendees Nomi Network ambassadors following our Lunch & Learn, and rightly so; many people bought Nomi products for themselves or friends, remarked that they were interested in supporting Nomi in the future, and considered the contacts they had who might be able to help Nomi Network. Being a part of expanding Nomi’s network was rewarding and exciting!

How can you be a Nomi Network ambassador today? When did the lights come on for you about modern-day slavery and human trafficking?