Beneath the Price Tag

I recently watched an episode of Last Week Tonight with John Oliver, in which he covers the subject of “fast fashion” (if you’re interested in watching, click here. It’s brings comic relief to a sobering subject, but as a warning there is some profanity in it!). As Oliver says, “There has been a pattern of troubling behavior in the garment industry for the past 20 years,” and it’s a problem that will not go away unless we take action.

As John Oliver explains in his show, fast fashion retailers are stores such as H&M, Zara, and Forever 21 that keep up with trendy styles by making clothes very quickly, in as little as three weeks; because they in turn sell these clothes for low prices, they make money by the sheer volume of the clothes that they sell. As consumers, we love the low prices, and we seldom consider how what we buy can be purchased for so cheap. But cheapness has a cost. John Oliver sheds light on the problems fast fashion creates, reminding the audience that labor violations are still very relevant and real today, as he describes repeated incidents of unsafe working conditions and underage workers or even “virtual slaves” making the clothes that we buy from companies such as GAP and Wal-Mart. Oliver remarks, “All brands in the industry have problems—GAP is by no means the worst—and if you ask GAP (as we did), they’ll point out they’ve made real improvements and tried as hard as they can to fix all this. But think about that: that means a company, trying as hard as it can, has been not infrequently connected to labor violations in multiple countries over two decades… they are losing the right to act surprised.”

There has been periodic outcry against labor violations as incidents such as the Rana Plaza building collapse (which occurred in 2013, killing over 1,000) have occurred and the working conditions in countries like Bangladesh and Cambodia have been brought to light. But despite these sporadic protests, it seems as though where change has come, it has not come fast enough. A key reason for this is that “one of the biggest problems with holding many brands accountable is that deniability seems to have been stitched into the supply chain.” Wal-Mart, for instance, has been found on multiple occasions unaware of the unapproved subcontractors that make its products.

Though there may not be easy answers in terms of reacting to fast fashion companies (boycotting will only lead to no money for the workers, instead of the little that they receive as it is), we can take proactive action in supporting fair trade industries, because they actively work to break the cycles fast fashion creates; this is where Nomi Network comes in. Nomi empowers women who might otherwise be prone to being trafficked the opportunities to learn skills to make products while working in a safe, loving community; the women are able to open savings accounts, provide for their families, and send their children to school, as they create products in a completely safe and verifiable supply chain. In short, Nomi leverages the fashion industry not to further the cycle of poverty and exploitation, but instead to reverse it (if you’d like to join Nomi in this effort, please consider buying bags, apparel, and other products at buyherbagnotherbody.com—or sharing about Nomi with someone else; 100% of the resulting revenue will go directly back to the women who make the products!). By supporting Nomi and other fair trade organizations, you aren’t simply using your resources to support good, reliable organizations and companies (although you’re doing that, too). Whenever you purchase from and advocate for fair trade organizations, you also contribute to a growing culture that values the well-being and humanity of those beneath the price tag of the clothes you wear, the food you eat, and the products you buy, and you help to restore justice and break the cycles of slavery and poverty that consumerism and greed have put in place. 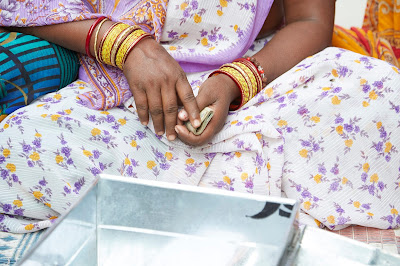 At Nomi, the women receive 100% of the revenue from the products they make.
Picture courtesy of davidgoldmanphoto.com.