The Voice of Sex Trafficking 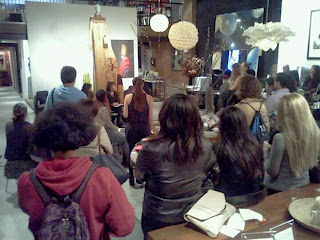 The second speaker on the panel at the Nomi Network’s event was Gigi Scoles of Vital Voices.  They’re an organization that also helps empower women who are subject to both domestic and international sex trafficking and sexual violence.  She was formerly the prosecutor of Essex county, NY., and dealt with many rape and violence cases.  She was then sent to Djibouti, Africa, to help spread awareness of violence against women.

The last speaker on the panel was Shandra Wowuruntu, a human trafficking survivor.  Shandra told her story of how she was trafficked to the United States from Indonesia.  She was expecting to be sent to Chicago for a new job, but instead, was kidnapped and sold into sex slavery to a brothel in Brooklyn, NY.  She managed to escape and overcame great obstacles, including homelessness, and built a new life for herself.   Now she is an inspirational speaker, spreading awareness of sexual slavery.

The panel's consensus was that raising awareness is the key to stopping the horrific industry of human trafficking.  Gigi Scoles emphasized on bringing awareness to elected leaders to help stop sexual violence in local communities.  This is one of the ways she suggested helping bring an end to sexual slavery.  If people of power see that citizens care about this issue then more training to officers to help identify slaves will be given and more resources for the sex slaves will be allotted.  Shandra answered Diana’s question on how trafficking can be prevented at the country of origin, among the other thought provoking questions, that allowed panelists to speak about their comprehensive experience in combating human trafficking.