The Pricetag on Women by Rajdeep Paulus 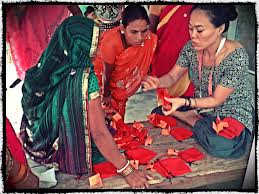 A year ago, I began blogging for Nomi Network, a non-for profit whose key mission is to increase marketing opportunities for women rescued from the treacherous web of sexual slavery. They are currently working with at risk and rescued survivors in Cambodia and India. They're just one of the many teams out there doing their part to fight. Because we all fight for something and someone. They fight for freedom. Specifically the freedom of women.

So when I watch a YouTube video of a girl who recently attempted to auction off her virginity in Brazil, I'm more than appalled. Of course her story is heart-breaking. Her mother is sick with very expensive medical needs, but I can't help but wince under the reality that the only reason she even considered this option in the midst of her desperation is because sex is a commodity in our world today. One that is rarely valued. Devaluing the victims of sexual slavery all the more.
Then the ultimate blow affirming just how flippantly a woman's sexuality is abused, the brutal gang rape of a 23-year-old college student in New Delhi that ultimately resulted in her death. She was just a girl. Her whole life ahead of her. I'm actually amazed that this particular case drew international attention, when according to the CNN reports,
"Most rapes go unreported for good reason. Of the more than 600 cases filed with the Delhi police last year, only one resulted in conviction. Powerless rape victims often resort to suicide." CNN report, January 4, 2013 by Frida Ghitis.
I was born in India. I get this. Even though I grew up in an educated, upper middle class family, I heard these awful words from the women around me. The one's that are etched in my mind from my younger years were similar to this: "Don't ever get raped. You'll be shamed. And no one will ever want to marry you then." I must have been twelve, if not younger.
But I learned this was not true when I grew older. A woman is not at fault if she's sexually assaulted, even if she was wearing a pretty dress or had a glass of wine. I learned these truths in college when I chose the topic of Sexual Assault for my senior seminar at Northwestern University. I knew what I learned was true, but when you've heard something your whole life, erasing the tapes does not happen overnight.
Tim Keller's words at the most recent Movement Day still ring in my ear. "We must stop treating sex as a commodity." Sex was never meant to be viewed as a loaf of bread, to be bought or stolen when someone thinks no one is watching.
And rape is not sex. Never has been. Never will be. I wonder what it will take for the country of my birth to wake up and give victims the voice to speak up against their hurts. Their losses. One can only hope that things won't return to the way they've been, but rather, when the hubbub around this one media-spotlighted case dies down, women and their bodies will be valued and treasured as the gifts that God intended them to be. Cherished. Loved. Worth more than just their bodies. Worthy to be loved.
So the price of sex. Or rape. Try taking the price tags off and seeing the women for who they are. Human beings. Real people. Each made in the image of God. And the word 'price' turns into one word. Maybe two:
Precious.
Priceless.
** What did you hear growing up that you learned later was a lie? How can you do your part and not let this type of lie perpetuate from generation to generation? Have you seen Trade of Innocents, the movie? Do you have a birthday coming up? It's not too early to start thinking of Valentine's Day. Someone you could purchase a cool product made by survivor through Nomi Network?