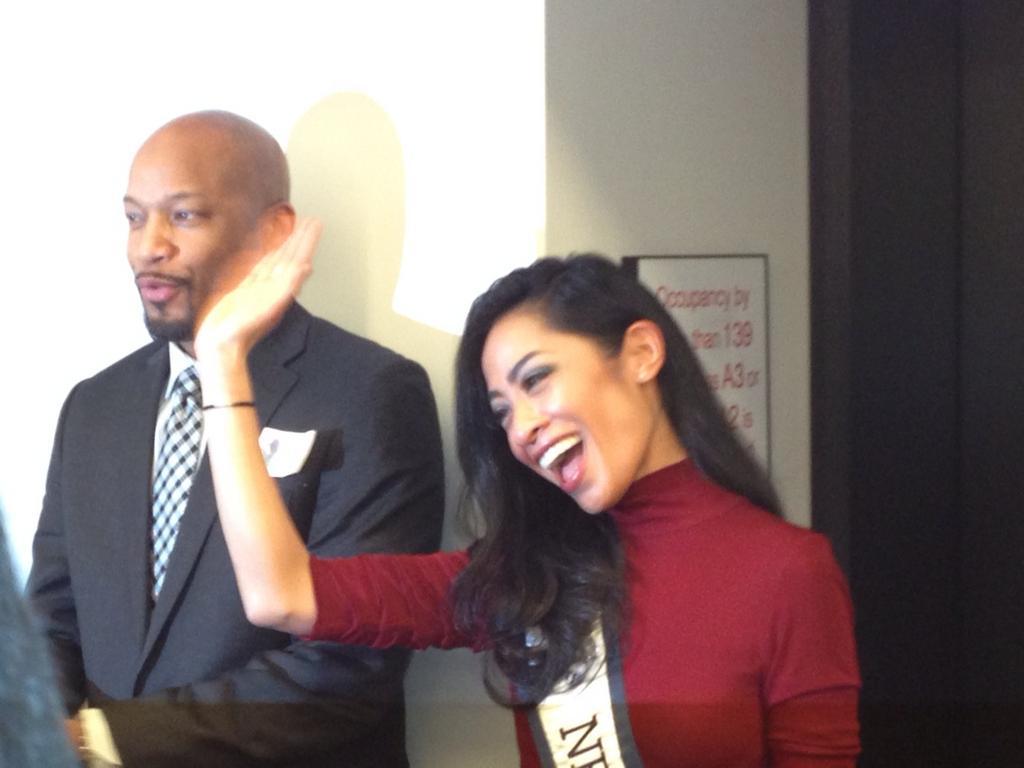 Although I love to make up stories and do the novel/fiction thing, I’m also an off the charts extrovert who loves to write about the lives of cool peeps I meet!
Today, I want to share an up close and personal with the lovely Jeannette Josue, the current Ms. New York United States. She’s modeled Nomi Network‘s products and helped present the awards last night at their annual Rockefeller Center Reception with the help of actor Erik McKay. Yes, we’re talking the real deal winner of a major beauty pageant! She’s so cool and fun and has been a blast to get to know. Dive into the interview below and plan to discover the deep and fun world of a woman who is beautiful, inside and out!
Me: How old were you when you first understood that women weren’t always treated right? Was there any particular show, news article or something else in the media that drew your attention to the immense issue of trafficking?
Jeannette: The very first film that made me understand the evils of human trafficking is “Trading Women” in 2002.  It was filmed in Asian countries such as China, Laos, and Burma and investigates the trade in minority girls into the Thai sex industry. It vividly shared the world of brothels, sex-workers, and corrupt politicians and law enforcement officers.  When I finally spoke to my parents about this, they said it’s almost a plague in Asian countries and part of the reason why so many come to America for a better life and opportunity.
Me: How did you get involved with Nomi Network and do you plan to continue to model and work with them in the future? What about Nomi draws you to them? Their work?
Jeannette: I learned about Nomi Network through JTS and The Set NYC.  I first did an event with them supporting 100 Cameras.  The event was so successful that we decided to throw another one, a New Year’s Eve event fundraiser that supported Nomi Network. The idea that Nomi Network fights to help end Human Trafficking by serving women in South and South East Asia, instantly caught my attention. The fact that they continue to empower these women who are survivors or were at the risk of being trafficked won my support. Education is one permanent value that can never be taken away from anyone, as Ms. New York United States, most of the programs I have supported ties in with empowerment through education.  I plan on supporting Nomi Network for as long as I can. I do wear one of their lovely “Buy Her Bag, Not Her Body” products of which I would hope more women will purchase. It’s a fantastic way to campaign to help End Human Trafficking and support the women of Nomi Network who crafted these products on their own.
Me: How do you strive to convey that message that these girls and women who are being trafficked have worth and deserve so much better? Have you had a chance to visit overseas or local survivors and hear their stories? Is that something you’re interested in doing someday?
Jeannette: One thing I would never do is tell these girl and women, that “I Understand” what they have gone and what they are growing through. All I can say is that I believe we all are equally talented and beautiful people with the God Given Opportunity to Make Our Lives Better. We just have to want it bad enough.
I would love to definitely show more of my support by physically spending more time with the local survivors, if my travels allows. But right now, at most, I can use my connections in the fashion industry and talk to some retailers who may want to sell the “Buy Her Bag Not Her Body Products”.

Me: When you were growing up, did you ever get mixed messages about a woman’s worth, her beauty, her sexuality, whose fault it is if a woman is raped? Just curious, because as a South-Asian woman growing up in Canada, I definitely heard some totally inaccurate things about my own worth if I were ever raped. I was told no one would ever want to marry me. I’d be used. And useless. I don’t know that I actually believed differently until college.
Jeanette: I grew up in a modest household and in a neighborhood that has now gentrified.  It was dangerous at night and rape victims were higher in numbers in the late 80’s and early 90’s, especially in my zip code.  My parents were always upset when the news would interview someone about a rape episode and the person said the victim  shouldn’t be running in Central Park in the dark, or would comment why the victim would take the subway home alone”.  Rape, was a common topic in news, in the neighborhood and it was very clear with my family that a women should never be treated without respect, and should never live with violence or victimization.
Me: With a platform like Ms. New York United States, what do you want to say to the young women out there, growing up and trying to love and accept their bodies. Be healthy. Not give in to the pressures to be thin. Eating disorders being so rampant, how can a super-model like yourself effectively tell teens to love themselves and believe in their inner beauty? How do you deal with your own self-esteem issues when your career is so external appearance dependent?
Jeannette: I believe the reason why I won this title is because of my confidence, self-esteem and just knowing who I am and being comfortable with it. Pageants today have evolved to where they truly are looking for a role model and there is no way you can be one if you don’t believe in yourself.  Confidence radiates through flaws of any kind.  Beauty is about loving yourself, knowing your own uniqueness and understanding your strengths.  I tell everyone, you are only as powerful as you allow yourself to be.
Staying fit, or looking a certain way, while most may argue, I don’t really diet. I do, however, live a very active lifestyle. I love running, I love MMA classes and I run many fundraising 5k’s. It’s part of who I am. I must say though, that staying healthy and fit plays a huge role on daily productivity.
My platform is education for inner city youth through sports activities. I support Best Buddies International, Special Olympics, Harlem Junior Tennis and Ice Hockey in Harlem. All of these organizations point to the same thing, which is building confidence to succeed, through the power of education. Similar to what Nomi Network is doing for these women survivors.
Me: If you could say something to the market of distributors and buyers (mostly men) out there who keep the sex-trafficking industry growing, what would you want to say to them?
Jeannette: I honestly don’t know. Just as I read this question, it made my stomach turn.
Me: I like how you often approach athletes during sports events with the enthusiastic phrase, “Meet so and so who has come away with a victory! She has bragging rights today!”  What bragging rights can we as women tell survivors that they have after they are rescued from a life of awful trafficking? What about those fighting for the women? What bragging rights do you want to have at the end of your lifetime in your fight for the voiceless?
Jeannette: For Survivors:
Be thankful that you still have the gift to see life as beautiful as it is. Be proud that you have risen above all negativity and fought and won your right to live.
Fighting for Women
It is because of them, they have given hope to humanity.
Me (Jeannette)
I was able to learn and serve with Nomi Network, to help end Human Trafficking and support the survivors.

Me: What is your ultimate dream? Miss U.S.A.? Miss Universe? Write a book? Dance with the your Hollywood Hotty of choice?

Love to hear people’s dreams! What were your immediate feelings when the announcer called your name as the winner of Ms. New York United States 2012?
Jeannette: Miss USA pageant, I competed in that in 2001. I won the state competition as Miss New Jersey USA 2001.  At that time, yes, I wanted to win Miss Universe. Who Wouldn’t?  In my younger years, I was completely enamored by fame. I just wanted to be in the spot light and didn’t really understand what being a role model meant.
Now, I am Ms. New York United States 2012 and I am very proud to be the representative of this amazing state. I entered the competition on a different angle. I competed at Miss USA to become an actress or model. I entered the Ms. United States competition to make a difference.  I can proudly say I did that and continue to do so during my reign.  I know I have been able to raise funds for organizations like Best Buddies, Special Olympics, Komen, MS Society, American Cancer Society, God’s Love, Food Bank of NY,  Meals on Wheels , Sloan Kettering, Lung Cancer Research Foundation and so much more.  I volunteered through the New York Cares network and learned so much more about life, humanity and the simple act of doing good.The big question, what do I want to do after this? Well I want to continue volunteering. I’ve grown so much as a person because of volunteering and I like to say that I thought I would change lives, but volunteering really changed me.  I will continue my job as a WebTV host for MarblePlayTV and continue to support organizations likeNomi Network and spreading good.
Me: A fun one: Share a few bands you listen to. Maybe a favorite song you love so much you’d listen to it on repeat.
1) Right before I get on camera for work I listen  Run This Town – Jay Z ft. Rihanna & Kanye West
2) If I’m out with my girlfriends, we always sing Kelly Clarkson’s Stronger
3) Anything from Coldplay, Tiesto, Killers, Dead Mouse, and Mumford and Sons.

Me: What one food is hardest to give up as a model? That you occasionally sneak a nibble of? Another fun one.
Jeannette: I can never resist French Fries. I will always, without fail, order French fries. Here’s a better secret. Once a month or if I am having a really bad day, I would order $60 of Chinese food and set it up buffet style in my living room and lounge on my couch all day watching HBO on demand movies. I call it my Junky Day.
And the Bonus: Me: What’s your lipstick brand? Because every girl wants to know what the models are wearing to keep it pretty and pink even after munching and drinks!
Jeannette: Now you want my busy secrets too! Lolol. I have different brands but stay with Shisheido and Lancome.
***
And there you have it! The lovely Jeannette Josue who motivates me to keep working out, gives me the thumbs up to eat fries once in a while and has a heart for victims of human trafficking and much more! Thanks for all you do for Nomi Network and for inspiring through your crown, Ms. New York! Because you truly shine, inside and out!
*Hugs* -Raj
p.s. I can totally picture you getting revved up while listening to “Run This Town!” And I confess that Hubs and I swung by Shake Shack last night and ate some cheese fries after the Nomi event! Really!

And the peanut butter hot chocolate… to die fordelish!
***
And you, what’s your story? What’s your dream? What make-up secret do you want to share with us? And what is your go-to junk food on your cheat days?