“Seeing India Through the Lens” by Rajdeep Paulus and John Pringle 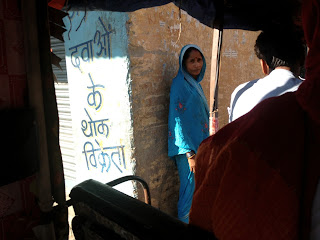 We’ve heard this a thousand times: A picture is worth a thousand words. And it’s true. There are details, colors, expressions and angles that words cannot capture like a photograph. When photographer John Pringle set foot on foreign soil to document the journey of Nomi Network in rural and urban in India, his initial equipment includes his senses.

“[I’m] Awakened to train horn blasting. It's about 2:30AM. [I] Collect sound bytes of early morning noises [and] passers by. [I] Catch sound byte of next train rolling in the distance. [At] 04:30AM [there’s a] power loss, [and the] train station goes to backup power. [Our] Train [finally] leaves."

As John focuses his lens, he strives to captivate on film—the world that surrounds him on this first morning in India.

When John arrives on Nomi’s site, all his senses are awake and he’s ready to engage with the actual recipients of Nomi Network’s outreach programs. Broken translation and cultural boundaries limit his progress, but nothing thwarts his enthusiasm.

“[The] Day begins and [the first] woman shows up. She should have been on holiday but as it turns out she chooses to stay near Supei [Nomi’s on-site Director] since it is the only love and positive reinforcement that she has experienced her whole life. Woman [number] two shows up and later her husband shows up [too]. My urge, having been informed [that they are a] couple is to engage the man and see how he feels about  his wife spending time with Nomi. He volunteers to cut paper, as the task of the day is to make labels. He knows how to make lines but seems stuck on cutting with scissors. It takes time and [I] sit on the floor with him to cut paper, although we found that we were using the 'good' scissors for cheap paper.

“At this point, I realize that this is an opportunity for the translator to learn how to engage one to one. Draw him in and get him to engage with the two women and husband. We get the husband to smile, which gets his wife to smile and the teamwork between the three increases. It is later that I am told that the first woman prefers the company of encouragement rather than the companionship of her husband who met her at the age of fourteen. With the second woman, her husband wanted to see what she was being drawn away from the house for. My hope is to make it a positive [experience] for each [involved].

“Towards the evening, another volunteer, “Danielle” arrives and let her get settled. Over dinner we debrief and plan out our week. The next day will be full and fruitful for capture. A little bump and scrape here and there but it’s all good. Plates get cleared but I don't notice that my iPhone has been lifted from the table. The owner returns with it and I realize that the plates had been stacked on it when it was accidentally taken. Good to have it back. End of the Day two in India.”

Even in the light of disappointment, miscommunication and an almost lost cell phone, John keeps his perspective and plans to return tomorrow. Because he longs for change. And change takes time.