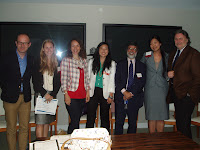 Before I had found my comfy seat and loosened my tie, my response was "I don't know." It was the best I could come up with at the time. After repeated suicides reported at Apple facilities, most recently in the southwestern city of Chengdu, this type of response may not be enough. That was the consensus of a panel discussion on ethical fashion generously hosted by Schiff Hardin, the well-renowned law firm.

Simon Collins, the witty Dean of the School of Fashion at Parsons was present daring others to risk controversy. Diana Mao laid the groundwork with confident statistics pointing toward the global slavery epidemic this generation faces. She represented Nomi Network, a nonprofit looking to tackle human trafficking by designing lifestyle goods that survivors produce in a safe, well-monitored environment. The debate was meant to probe couture and its uncertain relationship with purpose-driven fashion. If the panel wasn't organized by the Luxury Council, you would be right to assume the issue is easily ignored. 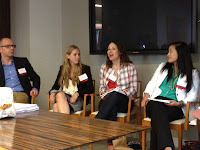 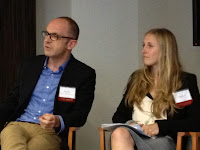 Discussing where products are made is no longer hyperbole. This issue along with others have far-reaching implications. It's not surprising that those speaking on the subject struggled not to take offense. But, business is business. Mr. Collins abruptly pointed out that companies need to make money to placate shareholders and fashion isn’t about doing good, but making things. Had Simon not made the point, someone else would have. It’s not surprising that in western culture when it comes to production, cheapest and best have become equivalent.

It wasn't long before the panel had covered other topics such as sustainability, fair trade, and cause-marketing. Just like the internet, in order to gain anything from the debate a short attention span was required. Elizabeth Long like most made sure to share the impact of her company. She was representing Same Sky a jewelry maker that provides employment to HIV-positive women in Rwanda struggling to lift themselves out of poverty. Elizabeth wasn't shy to point out the unwieldy 2.5x markup at Bloomingdales on her products, one reason she exclaimed cause-marketing has a long way to go before it can compete with larger brands. As recently as two months ago a report was trending on Reddit called "The Illusion of Choice" which listed 10 brands that own practically every product you see on the shelf from your grocery to your pharmacy. But don't stop there, another report last year from Business Insider details 13 Eco Brands owned by these same giant corporations. Examples include Ben and Jerry's, The Body Shop, Odwalla, Burt's Bees and Naked Juices all acquired in the last 10 years.

Marie Choi, representing the Advertising Council, was practical and raised concerns about doing your research and creating authentic brand relationships. She pointed out that cause-marketing is a $1.6 billion dollar industry, and that cross-branding efforts have become clever ways for the big guy to help the little guy. Non-profits are hungry for money, while large companies want the publicity. Another way large brands wear the cause-marketing colors is by using the word free. Ford’s People Fleet gave away 12 Ford Fiesta’s to 12 charities in need. However, this effort doesn’t change who makes their cars, or where they’re made.

Elisa Neimtzow, Principal of New York based Sequoia Lab, gave examples of a few sustainable business models. Greg Furman, the President of Luxury Council’s New York Chapter was sure to press on the issue because this was Elisa's area of expertise. She mentioned Warby Parker which matched the Toms business model of buy a pair, give a pair. This is curious since Tom's recently launched a glasses line this summer. Competition even in this market has increased. SoleRebels was by far the most interesting mention. This footwear company markets solely online. They claim to be certified by the World Fair Trade Organization and even go as far as to say they're the only one's that can say they're fair trade. However, Tom's claims "there are currently no official fair trade standards for footwear manufacturing." And then there’s Bob’s, an imitation line launched in 2010 by Skechers to mimic the popularity of Tom’s. The attempt was based on the idea that meaning would surpass value. But, as Fast Company’s Simon Mainwaring points out, it’s not just the “how” but the “why” that drives success for brands like Tom’s.

The “why” is becoming more important to consumers and has proven marketing communications can no longer rely on traditional routes to share the message. Actions communicate more powerfully than a static message. For those interested in strategy, Faris Yakob Chief Innovation Officer at MDC Partners shares his insight to the metacommunications within marketing efforts. He imparts that a do stuff, then talk about it model will work best if you want to get the consumer involved. If he is correct about consumer relationships, then as an extension we may see cause-marketing play an even larger role in the future.


Once the debate finally examined sustainability, Jochen Zeitz, CEO of the Sport & Lifestyle division of PPR and Executive Chairman of PUMA SE deserved a mention. Puma is owned by the same large umbrella company as Gucci and YSL. And like most established brands they push the message of fair trade and sustainability. However, if you visit PumaVision you’ll find a detailed report of the company’s sustainability practices. While doing no harm is impossible, the effort to do less can been recognized.

Schiff Hardin’s David Jacoby provided a kind voice of reason with his handout entitled Ethical Fashion: Issues and Definitions. It detailed the legal side of the otherwise broad debate. Even the definition he provided included working conditions, exploitation, fair trade, sustainable production, the environment, and animal welfare. While the panel attempted to cover each issue, the reality ensued. This may be a debate that requires legal scripting. Supply chains  of large companies like GAP, are being analyzed and online disclosures are now required most recently in California under the California Transparency in Supply Chains Act. We still wait on a far-reaching federal piece of legislation sitting in committee since August, 2011. Perhaps, moving this piece of legislation forward will answer some of the questions raised by the panelists.