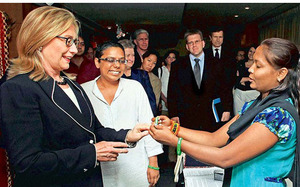 Today, Nomi Network interviews Ruchira Gupta, president of the Apne Aap foundation on Apne Aap’s newest initiative: the “Cool Men Don’t Buy Sex” campaign. This campaign has appeared in the news recently when Secretary of State Hillary Clinton met with Ruchira and other members of Apne Aap. Madame Secretary supported the movement by donning the campaign’s bracelets and t-shirts and asking her staff to do the same.

S: So Ruchira, for our readers who aren’t familiar with you yet, could you tell us a little bit more about yourself?
R: Well, I’m an anti-trafficking activist. I started out a little over 10 years ago when I was a journalist. It started when I made “Selling of Innocents”, a documentary about the selling of Nepalese women in Bombay. 22 of the women that I met during that time changed my life. They were former prostitutes who were looking for a place to sleep, a place where they could be free from abuse, be legally protected from the pimps and johns, as well as the police. I wanted to tell their story. And that’s how Apne Aap started.

S: Apne Aap. Could you tell us more about the organization? What does the name mean?
R: Apne Aap means “Self Empowerment”. Literally translated, the words mean “I can do it myself!” We called it Apne Aap because we wanted to make the women independent and not dependent. We didn’t want them dependent on either the shelter or the brothel.

Apne Aap works on a model that helps women rescue each other. Each woman works in a group of 10. We chose that number because 10 is a number that’s small enough where each individual voice can be heard but large enough that they have a kind of collective power. Each woman gains 9 friends to give her confidence and strength when she needs it. Together, they work to build literacy, get access to capital, find schooling for their children, grow in their political and legal knowledge and so on.

S: Amazing! How does your “Cool Men Don’t Buy Sex” campaign fit into this picture?
R: The campaign helps us tremendously! Our short term objective is to change the laws of India so that victims are protected while pimps and johns are punished. Our longer term objective is to change the way that we as a culture think about masculinity and sex. Prostitution is not just a supply problem. There would be no such thing as prostitution if there was no demand for it, and we want the demand for abusive, exploitative sex to be zero.

S: And how are you doing that with this campaign?
R: For the short term goal, we are currently gathering signatures to appeal to government officials to change the law. We’ve already hit the 10,000 signatures we were originally aiming for but with the presidential change coming this year and just the sheer size of India, we’re setting a new target of getting 100,000 signatures by November 25th. For our long term goal, we’re going to keep holding talks and conferences until the culture changes and we come to an understanding.

S: Awesome! Now, on your website, it says that Apne Aap works through Gandhi’s principles of ahimsa and antodaya. Could you tell us a little bit more about each principle and how “Cool Men Don’t Buy Sex” embodies them?
R: Wow! No one has ever asked me that question before. First, ahimsa is the principle of non-violence and it means non-violence to both the self and others. When a man buys a woman, he has already violated something deep within himself before he has violated the woman. The violence within causes the violence without. He’s not comfortable with himself so he goes to buy sex. A man practicing ahimsa, a cool man, will not buy sex. He will not violate the other. He doesn’t seek a sex that’s based off of domination and violence.

S: And the second? Antodaya?
R: Antodaya. Ant- means last and –odaya means uplift, altogether it means “uplift of the last”. With Apne Aap specifically, antodaya means lifting up the last girl, the least of all these girls, the prostitute who’s been kicked to the side of society. With this campaign, we are asking men to rise up and stand beside the least of these girls.

S: “Uplift of the last.” That’s an incredible phrase. Is there also a way that men are themselves uplifted in this campaign?
R: When men stand up and choose to stand alongside these prostituted girls, they are making a statement. Masculinity is about being strong, yes, but it’s about being strong in a way that’s not violent. It’s strength to protect, a strength that will not let a girl be either bought or sold in this world.

S: So what kind of men are you trying to reach with this campaign? What is the profile of a typical john?
R: It’s a myth that these johns are blue collar workers of low education and means, living without families. Most johns are actually well-to-do educated, family men. It surprised me. So many men have normalized sexual exploitation as just part of the world, the only way to have sex. One judge even asked me “Ruchira-ji, do you think we should all be celibate?”. I answered him “There’s a difference between sex and sexual exploitation.”

S: And how has this campaign been going? What kind of reception are you getting at these talks and meetings?
R: I think the best indicator of this campaign’s success is how this campaign is basically is running itself. Our petition is on the website. We have no funding for it. It’s all spreading through word of mouth. We’ll talk to the judges or police and then a few days or a few weeks later, another group will approach, asking me to speak with them on this topic.

S: So how can we support your campaign?
R: Well, the first is financial support. Apne Aap will always benefit from your financial support. Next, if you would like to volunteer you can contact Lindsey through the web site. We would love to see students host their own Cool Men meetings in America. They can show their support by wearing our t-shirts and spreading the message.

S: Thanks so much for your time, Ruchira!
R: Thank you.