“Fourteen! Fourteen! Does anyone know where seat Fourteen is?” 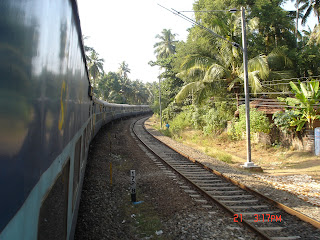 On her first train ride in India, Nomi Network’s Supei has somehow managed to pull her mammoth suitcase over steep steps, after crowds have climbed around, over, and almost through her to beat her on the locomotive that is not scheduled to leave for another hour.
When she finally determined she was on the correct train, between the relentless shoving and the sweltering heat that surrounded her like a wool blanket on a hot summer day, she resorted to using her best weapon to fight the crowds: her voice.
“Fourteen! Fourteen! Seat Fourteen! I’m looking for—”
“Here Madam.” A kind Nepali man heard the pleas of the foreigner and pointed her in the right direction.
“Was it a race to get first dibs on the best seat? The window seat?” I asked.
“NO! We’re all assigned seats. That’s why I screamed 'Fourteen!'”
Of course. That made perfect sense. What didn't make sense was the madness around her.
But when she managed to squeeze her “mother luggage” through the narrow walkway, she soon realized that there was no room for it under the two tier’s lower bunk. In the end, it sat in the middle, and like so much of her India experience thus far, her seat mates worked around it, over it, and just let it be.
Supei was on her way from Kolkata to a Rural State, making her rounds to the two main locations Nomi plans to partner with Apne Aap in training women to make and sell products instead of their bodies. Before she left Kolkata, she had a chance to tour the city a bit, visiting several sites, including the Victorian Memorial. In the end, the location that she recalled with wonder was simply Mother Teresa’s home. Because it was so—simple. The Nobel Peace Prize-holding nun lived a humble, basic life, and even her fame around the world didn’t taint her mission to love the poorest of poor. What empowerment and inspiration Supei must have felt from that visit!
The train ride, despite its chaotic beginnings, served to help transition Supei from the hustle and bustle of the city life in Kolkata to the country face of the Rural State, and after several hours of sleep on her second tier bunk with only a curtain for privacy, she awoke to see India passing by. And what a great way to soak in part of the country since the train, like most vehicles in India, didn’t move that quickly. The landscape changed slightly, as the villages passed by with waves from folks in the fields watching the train chug along.
Life in the Rural State is a tad less noisy than Kolkata, although there are many days when Supei wonders if she’s residing next to a disco club with the frequent pumping of Bollywood tunes mixed with Western music. Miscommunication is a never ending challenge. Is she going? Is she staying? Why didn’t the taxi driver told specifically to pick up her Nomi intern park so far from the airport? Without a sign of the intern’s name? Sigh. India. And the toilets. In her own words, “You just have to make sure you don’t go too often.” And the cold showers. Not loving them. But she’s making do.
With the frequent miscommunications and language barriers, [even the Hindi translators can’t always catch all the nuances of the various dialects,] Supei is learning to accept that things just don’t move quickly in India. Even the Government Officials from Delhi and D.C. called Nomi’s approach “a very ambitious project.” Regardless of the daily setbacks of electricity outages and unexpected delays, Supei’s voice reflects the radiant hope of Nomi’s dreams of helping women in India.
When you hear the story of one woman Supei met with, you know their efforts are well worth it. Lady M., a woman prostituted and beaten by her own husband, got involved in a SEG [Self Empowerment Group] when she had no where else to turn. She  lived in a Red Light District, feared for her children, and had no idea how her life would turn out. Since she joined Apne Aap and became and SEG Group Leader, her husband found a job, her children attend school, and she wants a bike. In order to travel to nearby villages. So she can help other women!
When Supei met the at-risk pool of women, they seemed warmer, having not been tainted by the lifestyle that steals so much more than touch. The women still enslaved in trafficking carry a bitterness about them, used to outside volunteers helping for a day or two and then abandoning them back to their dark worlds. They come asking for rice and money, not expecting to be invested in. This is all they’ve ever known.
Nomi’s methods remind me of the old adage: "Give a man fish, you feed him for a day. Teach him how to fish, and you feed him for a lifetime."
So as Supei evaluates the pool of women in the various villages, she’s looking for women who can cooperate in groups as well as work independently and women who can grasp basic stitching skills and follow directions. Most of all, she’s looking for women who will show up and be faithful, sticking to the task. The reward of lasting freedom depends on it.
In addition to training the women, Nomi hopes to build the training space with the help of Apne Aap, provide childcare for the female participants, and assist with transporting the women to their jobs. 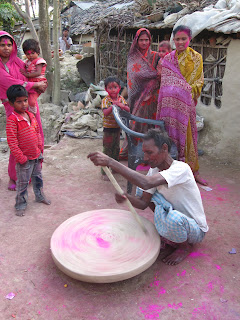 We closed our conversation with laughs over the Holi celebrations that just passed this week. “Everyone, young and old, was dancing all funky in the streets, going crazy with colors flying everywhere.”
Supei and her coworkers celebrated Holi without the chaos but with plenty of color. One staff member gave Supei a nice smear of pink across her cheek before “dunking another friend with a nice splash of many other colors.”
Supei laughed as she recalled her Asian skin with paint across it. “Even when you wash your face, when you start with such white skin, for days, you still look like you ate too many carrots!”
The last thing she shared with the help of a Nomi intern was a story they had heard a day ago. From a twelve year old girl. The story was titled, “Courageous Sister.” It was a make belief tale of an older sister choosing to work instead of following the traditional arranged marriage path. With the money she made, she was able to rescue her younger sister from a life of marital abuse and misery.
Nomi strives to shape many courageous sisters with their work in India. One woman at at time. Granting them significant and meaningful freedom that they can pass on to generations to come. Especially the little girls. Who can pass it on to their children. And on and on.
Musical artist Toby Mac sums it up when he sings, “If you gotta start somewhere, why not here? If you gotta start sometime, why not now. If we gotta start somewhere, I say here. If we gotta start sometime. I say now!”
It’s now time for Nomi in India. Let’s do this.