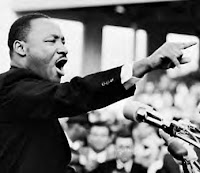 – Martin Luther King Jr. in Letter from a Birmingham Jail

With Diggs and Tweets, product lines and website designs, the modern abolitionist movement has come a long way from the sit-ins and boycotts, the demonstrations and protests of Dr. King’s civil rights movement. The letter of the law stands on the side of the abolitionists in nearly every country on earth. The Civil Disobedience that Dr. King practiced isn’t the answer to today’s struggle to end slavery. In fact, slavery would disappear if the laws were followed.

Centuries ago, the companies with royal charters traded gold, sugar and slaves across oceans. Built on slavery they grew into massive organizations, unstoppable juggernauts backed by law. But the work of but a few abolitionists ended that dark chapter of human history. Those who abuse children, traffic humans and operate brothels must do so in the shadows, must veil their activities with bribes and lies. There remains a great deal of work to do but the tide of battle has turned in the fight against slavery.

With the dedicated efforts of modern abolitionists, we may well see the end of the slave trade in our lifetimes. In light of that coming victory we abolitionists should not only look forward and develop new strategies for the 21st century but also look to the past and draw inspiration from the work of our predecessors.

“We must stand up amidst a system that still oppresses us
and develop an unassailable and majestic sense of values.”

“As long as the mind is enslaved, the body can never be free.”

–both quotes from his address to the Southern Christian Leadership Conference, ‘Where Do We Go From Here’ 1967

When we think of slavery in both its historical and current forms, we often think of the shackles, the ropes that bind the victim, the lash and gun that continues to threaten them. But these are only the physical emblems of slavery. The deeper, more insidious form of slavery is a systemic slavery that works invisibly and binds more surely than any manacle ever has. It takes the form of a slave owner telling his victim that because she was raped and brutalized, she is now worthless and should accept her destiny as a slave. It takes the form of slick talking middle men drawing up contracts to impress and bully the uneducated and impoverished into selling away their children. Educational initiatives are a necessary component to fighting slavery but along with an education that translates into economic security, abolitionists must also develop values education. Culture and poverty are strongholds that must be assailed if the captives are to be set free. It is not enough to legislate slavery into criminality.

The values of non-violence and human dignity that Dr. King held forth need to be communicated abroad. Not only to the globalized cities easily accessible via internet and airports but to the places where human trafficking and slavery thrive, in places of deep, global poverty. One fundamental value that must always be communicated is that at no point can a human being ever be deprived of his intrinsic dignity.

“The time is always right to do what’s right.”

And so, one final thought on Martin Luther King Jr. and modern day abolition. The struggle for freedom has come a long way but more still needs to be done. There are still 27 million slaves yearning for liberty and if Dr. King has taught us anything it is that injustice everywhere is a threat to justice everywhere.