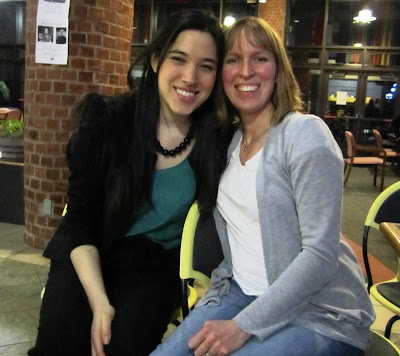 In the quaint, little town of Saratoga Springs, NY, tucked four hours away from the concrete jungles of New York City, lies Skidmore College - the genesis of Alissa Moore’s journey into the world of fashion and the arts. Alissa returned to her alma mater on April 15, 2011 to share about Nomi Network, the non-profit she co-founded, and how she was inspired to bring hope to such a dark issue.

Alissa’s Friday night began inside Skidmore’s The Little Gym, where student designers, make-up artists, models and DJs produced the Element Fashion Show to an audience of approximately 300 attendees. As the Fashion Show’s opener, Alissa shared about Nomi Network and her personal encounter with Nomi, the young Cambodian girl whose simple embrace drew her into taking action. After presenting how Nomi Network is a nexus where professionals in the public and private sectors fuse their expertise for the purpose of freeing those in sexual bondage both domestically and abroad, Alissa encouraged the students that they too can use their talents and experience to impact positive change in another’s life. Yet, the night’s pleasantly unexpected act 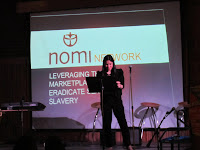 of kindness and generosity came from the student producers who announced – to Alissa and the audience – that the show’s proceeds would be donated to Nomi Network. Alissa thanked the producers backstage and headed off elated to her next speaking engagement at the SPA Student Center.

Inter-Varsity, Alissa’s campus fellowship during her Skidmore years featured her as the alumni speaker for Inside the Business of Sex Trafficking: A True Story of a Modern Day Abolitionist. Twelve other campus clubs, including SASW, FAN, Hillel, ACA, Office of Religious and Spiritual Life, Skidmore Democrats, Newman Club, LateNight, The Center for Sex and Gender Relations, Pride, OSDP, and BARE partnered with Skidmore’s Inter-Varsity Christian Fellowship to bring attention to the sexual trafficking phenomenon to the campus for the first time on such a scale.

Students and faculty members packed the room and some even stood listening in the halls of the Student Center. Alissa gave a business-like presentation of the hard facts of human trafficking and sex trafficking. The sheer number of incidents astounded the audience. However, Alissa’s presentation of Nomi Network’s market-based solution to the monstrous problem shed newfound understanding on the systematic barriers that contribute to the victim’s struggle. Nomi Network’s holistic approach focuses on preventing the cycles of poverty that perpetuates the abuse of women and young girls. By providing job-training and increasing the skill-set level of each woman, the women can turn to other viable sources of income and even compete in the global marketplace. Furthermore, by connecting retailers and designers to the eco-friendly products made by the survivors and women at-risk, these critical market players are helping to build a larger slave-free distribution chain. Each purchaser is then invited to purchase these products, connecting the global consumer to the faces and stories behind the issue. Alissa’s presentation ultimately shared the choice that each individual has in giving someone else freedom. This revelation opened the eyes of the undergraduate students and faculty to the power they carry every day. Not surprisingly, Nomi Network’s product table, positioned prominently in front of the Skidmore Shop, grossed $400 plus in product sales at the event. 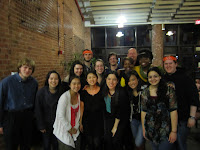 the evening was punctuated by an InterVarsity student’s testimony of date rape and on-going sexual assault by her boyfriend when she was fourteen. This bold, young woman allowed herself to be vulnerable before her peers and professors to underline that a victim is your friend, your sister, your girlfriend, your colleague, your neighbor. She matters like all the other women and young girls who you know may matter to you. These stories so often silenced by the shame and self-deprecation caused by sexual abuse is familiar to many women. By speaking of how she overcame these grim years, she gave hope that redemption and healing are possible. Her story, like Nomi’s story, proclaims: “Know me, know my story, know my success.” Nomi Network’s mission is to empower each woman the organization serves to live out this anthem of hope.

Discussions of Alissa returning to Skidmore in the future have already begun. Her graduation into the anti-human trafficking field marks the first steps on a pathway that many future abolitionists from Skidmore will soon courageously follow.