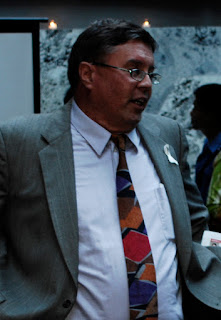 How did you first learn about the human trafficking issue, and what was your reaction?

I am sure that I had heard of human trafficking before, but in January of 2009, I read an article by Nicholas Kristof, of the New York Times, about girls being forced to work as prostitutes in Cambodia. He described it not as an isolated case, but an evil, ongoing practice involving thousands of children who, besides being raped multiple times per day, were sometimes beaten, drugged, starved, and tortured. My reaction was that this was an outrageous moral offense and a crime against humanity. I do not know how the good people of the world can sit by and allow this situation to exist. I emailed the Kristof article to a number of friends urging them to raise their consciousness about this. To my surprise, Alice Chang replied saying, “Hey, did you know that my roommate Diana was an anti-human trafficking activist and that she is in the process of starting a non-profit organization to fight sex-trafficking Cambodia?”

You have been a strong contributor to Nomi Network's efforts. What motivates you to be a part of this team?

I have always had the desire to work for social justice but never found a convenient opportunity. The fact that I am getting older gave me a sense of urgency—that I had to do something while I was still physically and mentally able to do so. I want to be able to say that I tried to help make the world a better place.

When I discovered Nomi Network, I had just completed a Master’s Degree in Management that was focused on the non-profit sector. As I was finishing my Masters, I had decided to keep an eye out for a volunteer opportunity with a non-profit with which I might be able to work full-time after I retire from my day job.

When I found out about Nomi Network, I saw that it was a particularly good opportunity. With a startup, you can get involved in things that you would never be able to in a large, established organization. I also thought that I would be able to use or at least observe some of the things from my master’s program that I would not be able to on my day job. In fact, everything that I have done with Nomi Network has helped me to broaden my skills, knowledge, and experience.

My day job is in an industry where money and power count for everything. With Nomi Network it is a joy to be able to work with people in an organization where everyone is intrinsically motivated and where we are all working for something transcendent, something beyond money and power.

You are very involved in Nomi Network and are continuously conducting research on human rights. What do you do for a living?

Given your experiences with Nomi Network, if you were given $1,000,000 how would you allocate the funds to end sex-trafficking?

With most problems, there are two aspects, the immediate crisis, and the root cause. We have to address both. One million dollars is not a lot of money. I would use the money in a small region, such as Cambodia, where it could make a difference in such a way as to set a precedent to change the society permanently. The needs of the victims are obvious. To eradicate the root causes is a much bigger problem.

One of the root causes of human trafficking is poverty. Literacy is the fundamental element for economic empowerment and the prevention of poverty. I would use the money to build and improve schools in the poorest rural regions of Cambodia as well as in the neighborhoods in Phnom Penh where sex trafficking is most common. Cambodia has a very high dropout rate among girls because many schools do not have bathrooms for girls. We need bathrooms and sanitary supplies for girls. In school, I would also provide free breakfast. Malnutrition is common in Cambodia. Yet, by Western standards, the cost of food is mere pennies. Providing breakfast is an added incentive for parents to send their children to school.

Another aspect of education in Cambodia that needs to be addressed is that the salaries of school teachers are so low that it does not meet even their basic needs. It forces teachers to find other ways of supplementing their income. If teacher salaries were boosted to a living wage, it would allow them to focus on education, and it would draw more qualified people into the profession. The entire country would benefit.

However, I think it is important to point out that money alone is not a guarantee of success of any social initiative. Projects where large organizations suddenly arrive with money and resources, complete a project, and then leave, frequently fail in the long run. The key to making something like this work is to first build relationships with the community and get the buy-in and support of the local leaders, parents, and school teachers. If they feel that they have influence in building the school the way they want, that it meets their needs, and that it is their school, then they will support it wholeheartedly, and it will be successful.

How has being a father influenced your views on child sex trafficking?

I don’t think being a father has affected my views on child sex trafficking as much as my own upbringing. My parents and grandparents lived for their children--they sacrificed their own comfort and material well-being for the benefit of their children. My parents were very strict, and I was overprotected. However, I had the freedom to be a child. Every child in the world should have the freedom to be a child.

My favorite experience at Nomi has simply been the honor and privilege of being able to work with others who are selfless, and committed heart and soul to making the world a better place. On a more specific note, one of the things that I have done at Nomi Network has been to reach out to people outside the organization, for purposes of networking and assistance. Previously, I would have thought that I could never do such a thing. Yet, I have done it successfully, and I find that amazing. I also like the interviews that I have done for the Nomi Wire and Nomi blog.

What is your advice for those who are interested in getting involved with anti-human trafficking efforts?

As with any commitment, to be successful to some extent, you have to know who you are and what your values are. Understand what it is that you desire. Do the proper discernment if you have to. After that, plunge in! It doesn’t matter what you do to start. Do anything to get your feet wet. Your experience will tell you whether you made the right choice. Whatever you do to start, you will eventually find the right niche for yourself. And no matter what your experience is, you will grow as a human being.

Incidentally, I am very aware of the fact that I am at a different place along the journey of life than most of the others in Nomi Network. I believe that every person has a different path in life. Everyone has talents, including ones yet to be discovered. No one should judge themselves as inadequate. If you have the desire to help, then act on it.