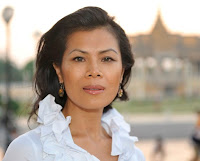 Theary C. Seng is an American-Cambodian attorney and activist now living in Phnom Penh, Cambodia. She was born in Phnom Penh in 1971 and lived under the Khmer Rouge regime from 1975-1979. In 1980, she and her family immigrated to the United States. In 2004, she chose to return to Cambodia permanently.

In Cambodia, Theary founded the Center for Justice and Reconciliation, a non-profit organization that seeks justice for the victims of the Khmer Rouge. She is also a founding director of CIVICUS: Center for Cambodian Civic Education, an organization designed to teach Cambodian citizens about civil rights, law, and government. She lobbies and speaks often about the major social issues in Cambodia which include human rights, poverty, education, land grabbing, government corruption, and human trafficking.

The Khmer Rouge regime was responsible for the deaths of 1.7 million Cambodians, almost twenty percent of the population of the country at the time. The Khmer Rouge army gained control of Cambodia in 1975. The Khmer Rouge forced all of the residents of the cities to evacuate to the countryside, to become slave labor in collectivist villages. The Khmer Rouge arbitrarily killed anyone they didn’t like, including the systemic executing of everyone who was educated or had foreign influences.

Theary Seng and her family witnessed the full extent of the horror. While she and her family were evacuating Phnom Penh, Theary’s father decided to make a trip back to the city to get more food. He was never seen again. Sometime later, Theary, her mother and a brother were imprisoned for several months, where, one morning, brother and sister woke-up to discover that while they were sleeping, their mother had been taken away to be killed. Throughout the entire period, in both the collectives and the prison, families and individuals were being taken away and killed on a regular basis. Food, clothing, housing, and medical care were scarce. Everywhere, people were tortured, worked, and starved to death. Theary Seng's extended family of grandmother, aunts, uncles, cousins, and brothers became refugees in their own country. At first they tried to seek refuge in Vietnam, but that proved too risky. They along with groups of other refugees decided to escape into Thailand. But Thai soldiers forced them at gunpoint to march back into Cambodia on a narrow path through a valley that was heavily mined. If anyone refused, was too tired, or lagged behind, the Thai soldiers simply shot them on the spot.

In 1979, Theary and her surviving extended family members were able to successfully cross the Thai border at another location and arrive at a refugee camp. After a year, they were accepted as refugees in the United States. Theary went on to graduate from Georgetown University in 1995, from the University of Michigan Law School in 2000, and is a member of the bar in New York State.

In 2005, Theary published a memoir titled, Daughter of the Killing Fields, incorporating historical sources, her own childhood memories and feelings, as well as the recollections of her family and others. As a young refugee in the United States, Theary became a Christian, and she attributes her sense of social obligation--of a need to give back--to her Cambodian past, combined with her Christian faith. As a law student and a lawyer Theary had gone back to Cambodia several times as a volunteer to assist with various human rights projects. In 2004, she moved to Cambodia permanently, with the initial intention of working on labor issues.  But eventually the scope of her attention shifted and expanded to seeking justice for the survivors of the Khmer Rouge.  She has been an influential public figure in the efforts to bring the former leaders of the Khmer Rouge to trial.  Moreover, Theary frequently writes and speaks about what is needed for the Cambodian nation to recover from that evil regime. She has published articles regularly in Cambodia Daily, the Phnom Penh Post, and Ki-Media, She is also the co-host of a Cambodian T.V. show called, Youth Leadership Challenge.

After the Khmer Rouge had killed her parents her parents, Theary became the beneficiary of the unconditional love of her extended family of grandmother, aunts, uncles, cousins, and her four brothers. After many years of healing of healing in the U.S., she was able to emerge from the experience with her humanity and her emotional health intact. Unfortunately that has not been the case for numerous other survivors. The Khmer Rouge years have scarred the psyche of millions of Cambodians and left them with a legacy of domestic violence, post-traumatic stress disorder, hyper-vigilance, and social dysfunction that permeates their society.

In an interview, Theary said, "My work here is not to do anything big but to be a common citizen back in my homeland where I suffered a lot, and now I'm taking that suffering and shaping it into hope, and trying to work with individuals who have not had the time and space to heal that I've had.”

Besides the killings and abuse, the Khmer Rouge destroyed all of the commercial and education institutions in the country, leaving it as the poorest country in the world. In Daughter of the Killing Fields, she said: “I continue to mourn the loss of lives due to the Khmer Rouge. Today, I also mourn the loss of human potential. How many Khmer Mozarts, Einsteins and da Vincis will never be realized because there are no infrastructures to encourage and absorb a Khmer child’s potential? I mourn when I meet a little girl on the street begging. I see my face in her face. The only difference between us is in our opportunities. At one point in my life, an opportunity existed which led to other opportunities that nurtured and encouraged my budding potential. In this little girl’s situation, in light of the current infrastructure and framework, the odds are stacked against her.”

Theary Seng's own childhood story was a victory of hope over persecution, suffering and evil.  Theary could have chosen to remain in the United States and pursue a career as an attorney, while living a life of comfort and affluence. Instead, she has chosen to work to inspire hope in her fellow Cambodians, to lead them to a vision of justice, human dignity, and triumph over adversity.


Also see Nomi Network's, An Interview with Theary Seng, on Sex-Trafficking in Cambodia