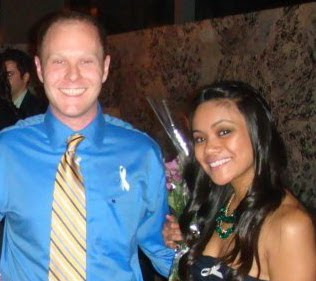 Joyce Guinto and Don Torrance were on the Nomi Network Spring Cocktail & Award Ceremony task force. Although, they both did not have prior experience in fundraising that did not stop them from securing in-kind donations from over 20 businesses. Since the inception of Nomi Network in 2009, we have been working with our passionate and talented volunteers to fulfill our mission of leveraging the marketplace to eradicate human trafficking.

Diana Mao is a friend of mine from college and in 2007, she told me about her trip to Cambodia and the she and Alissa had after visiting Cambodia. What begun as an idea seemed to have blossomed into Nomi Network in the blink of an eye! I was aware of the sex-trafficking epidemic, but did not know exactly how to get involved. I first started in Nomi Network by helping with fundraising events, attending volunteer nights, and raising awareness among my friends and family. It’s been over a year later, I'm still here!

I was most surprised at how many people are deeply involved with Nomi Network. It's not just a temporary volunteer experience for most of us. We're involved in a permanent movement. It's beyond intimidating to think that your actions can make a difference in the fight against sex trafficking, especially when you're worlds apart from the countries where it's most prevalent. However, I am so amazed by everyone in Nomi Network’s efforts to ensure that the network is successful in changing the lives of survivors while educating the rest of the world.

I was involved in securing in-kind donations and helping with the overall flow of the event. The best part of that experience was working with such brilliant and energetic volunteers and seeing our efforts transpire during the Spring Cocktail. I also felt so honored to have met some of our board of directors and special guests, such as Ruchira Gupta and Mamie Gummer.

The New Orleans fashion show! It's an excellent example of how Nomi Network's goal of leveraging the fashion industry is becoming a reality.

Working with Nomi Network has encouraged me to further my education in social work and non-profit management.

I attended the Nomi Network Launch Party shortly after the original Nomi slogan totes were launched and I saw several of my friends working for a great cause. One of my friends that also attended told me how cool she thought it was that I was there, being a male. I realized that it shouldn't have been a big deal that I was a guy and attending this event, and that all men should consider being passionate about this cause. The experience fueled my initiative to join the network.

I have learned that huge goals can be met, individuals can discover their talents quickly and people's souls can be ignited in much less time than I ever imagined. What Nomi has accomplished in just over a year is noteworthy.

I was charged with finding in-kind donors to donate items to Nomi Network that were then raffled off to patrons attending the Cocktail. I also helped secure in-kind donations of both food and flowers, details that helped make the night a real hit! I enjoy being asked, "Find this for me." and then reaching out and realizing that I have so many talented and capable people in my life who are willing to lend a hand. That was the most exciting part!

For me, I could easily get excited about specific Nomi events, but the overarching mission is what impresses me most. There is no better way to empower victims, of any kind, but by giving them the tools they need to move on from their tragedy. I am increasingly enthusiastic about how we can spread Nomi's message more effectively to our peers, and also to the world at large. Human trafficking has no chance of being stopped if we don't educate those who are responsible for contributing to it.

My true passion is for writing and that was my initial talent/skill that I wanted to share with Nomi. I have enjoyed writing each month for the Nomi Wire.