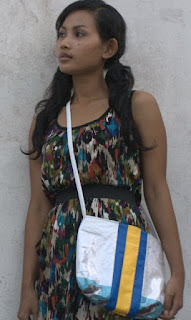 Nomi Network’s Co-founder and Lead Product Developer – Supei Liu – recently traveled to Cambodia to visit Stop Start, our partner organization. This organization manufactures Nomi’s products and provides jobs for survivors of human trafficking and women at risk. During her five-week stay, Supei was struck by an idea: have the women whose lives were being changed in a photo-shoot with the products that were being used to change their lives.

At Stop Start, Supei approached the general manager with the idea and asked for five volunteers who are survivors or women at risk. The manager at Stop Start found several candidates who would be compensated for their time. Foreign locals gladly donated dresses and make-up to be used for the photo shoot. The volunteers showed up to the session wearing their own best clothes and what make-up they had, not knowing that items had been donated, but they were excited to try on the new clothes. Although the language barriers posited an obvious challenge to communicating with the women, Supei’s animated personality helped convey directions and create a light-hearted atmosphere.

The purpose of the photo shoot was not merely to model the products for buyers, but also to make the women at Stop Start feel beautiful in ways that they may not have felt in a very long time, if ever. Who better to model the bags than the women –– who proudly made them? And through this simple photo-shoot, these women transformed before the camera. Their shyness and timidity early in front of the lenses became comfort and confidence at the end.

Nomi Network plans to have more dresses donated for future photo-shoots that will be given to the women to keep after the shoot is finished. Mary, a volunteer from New York City, was the photographer & Supei served as the creative director. Photos from the shoot have been posted at www.buyherbagnotherbody.com where you can also purchase the bags. If you are interested in donating new clothing or funding for Project Beauty, please contact diana@nominetwork.org

Project Beauty, a self-esteem building initiative that restores identity, self-image and confidence through photography. Nomi Network pampers the women with a make-over and a new wardrobe for the day, and sets up a photo-shoot where they are captured as beautiful, dignified human beings, rather than objects. By providing a holistic approach to human trafficking crisis, Nomi Network impacts lasting, sustainable change in the lives of the women.