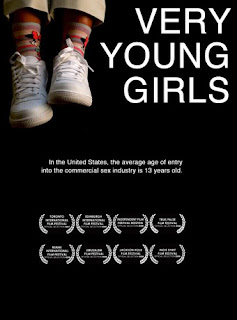 Girls Education and Mentoring Services (GEMS) is an anti trafficking organization that I admire deeply. I was first exposed to their work in 2008 when, on the onset of launching Nomi, I became obsessed with learning about all facets of the issue.

The film is summarized on the GEMS’s website as “an exposé of the commercial sexual exploitation of girls in New York City as they are sold on the streets by pimps, and treated as adult criminals by police. [It] follows barely-adolescent girls in real time, using vérité and intimate interviews with them, documenting their struggles and triumphs as they seek to exit the commercial sex industry. The film also uses startling footage shot by pimps themselves, giving a rare glimpse into how the cycle of exploitation begins for many women.”

Yes, this is certainly an accurate synopsis of a powerful film, but what left me recommending this film to anyone who would listen, was the intricate, yet astoundingly resilient hope that was demonstrated over time and through the personal stories of the girls involved. In contrast, most of the films that I’ve seen on the topic of trafficking attempt to give such a general overview of the topic and its many forms, that they lack the simple power of walking with an individual as their life continues.

I was also deeply impacted by this film because it takes place in New York City and highlights local hot spots and neighborhoods where trafficking occurs. I also appreciated that the film recognizes the power of media and other mainstream influencers that normalize abuse, sexual exploitation and the objectification of the human body.

When I suggested writing a blog post about this film I was not aware that I would be recommending it as a part of a curriculum that I would create for a 2011 Lenten study guide. Lent is the 40 day period before Easter that is remembered through prayer and fasting by the Christian church. This year several Christian communities all throughout NYC are coming together to collectively observe Lent through praying and fasting for several different issues all relating to social justice and our city. Each week from March – April, we will be focusing on a different umbrella topic that impacts the city, and Human Trafficking has been slated for week two. A friend asked me to write the study guide on this topic, and I have strongly recommended that participants in the study watch the film Very Young Girls. I’m pleased to have an opportunity to share this as an additional resource for this group.